Whether you’re a huge anime fan or not,  1995 was one of the best years for anime songs, look at this site and listen to them (or anison, as they are referred in the anime community). During this year, many wonderful anime series came out and captivated audiences everywhere, even memorable in today’s world. I want to share and revisit some goodies from that year. Now, I won’t do a top 5 list because it would be unfair to the other songs if I place “Cruel Angel’s Thesis” as number one. Personally, it isn’t my favorite anime song from 1995, but everyone’s favorite and it is still on everyone’s mind when they attend a karaoke booth here.

I originally wanted to write this as one blog post. But, I realized that I wanted to discuss
about waaay too many anime songs, so the draft for the original post got bigger and bigger. So, I decided to do a monthly series so each anime song from 1995 could get a fair chance of being featured here. 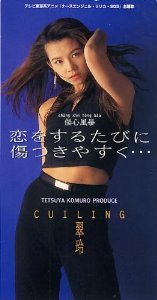 wo Surutabini Tsuzutukiyasuku” was the dance craze in the anime word back in the day. Composed by Tetsuya Komuro with lyrics penned by Yasushi Akimoto (hey, we mention this guys a lot this month!(, “Koi wo Surutabini Tsuzutukiyasuku” was performed by a relatively unknown Chinese singer named Cui-ling (This is how it was written on the singles, I am sorry if I misspelled it).
The song opens up with a cool synthesized riff that leads to the main chorus. I think the guitar riff during the middle interlude is pretty awesome too as Komoro combines the guitar’s sound with some special effects. Besides that, I personally think that this song is a plain dance song. I don’t know why it was so special in the day, maybe the harmonies? I really like to sing harmony on this song whenever I sing at karaoke. 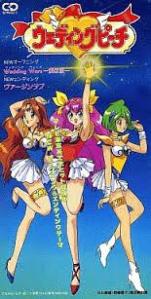 I don’t know much of Erina Nakajima except she sang this song as the second opening for the above mentioned anime. I remember first watching the opening animation back in the days when internet was still on dial-up.

I got introduced to this magical girl anime by a t-shirt that my dad bought when he was stationed in Korea. I can’t fit in that t-shirt anymore but I still have it in storage, looking at it from time to time because Wedding Peach is a really great anime series (and an even better manga series).
“Wedding Wars ~Ai no Honoo~” is a marvelous song due to many factors. The most important factor is the song is brimmed with emotions from wishful thinking to sadness and beyond. You can experience these emotions the best during the chorus when the singer uses shorter rhythmic patterns, a dual between the chorus, the lyrics, and the phrasing. Speaking of the lyrics, they are amazingly expressive as they actually portray Wedding Peach’s plot. You should check the song lyrics out if you never seen Wedding Peach,
The song climaxes beautifully before at the end with the “Negai wo Komete” part, just beautiful. The momentary pause of instrumentation is crucial to this part as we can listen carefully to the singer but also anticipated for what is to come. The wedding bells at the ending are a lovely touch to the song.
I think this ending part and the song in general makes it a better opening then FURIL’s “Yumemiru Tenshi Angel”. I love “Yumemiru Tenshi Angel”, I really do, but it’s too cute, too girlish, and lacks the emotions, that portray the series so well. If memory serves me correct, the manga of Wedding Peach is much more darker than the anime version which was trying to bank off the success of Sailor Moon and the saturated commercial market for girl toys. If Wedding Peach was remade as a modern anime, I feel like “Wedding Wars ~Ai no Honoo~” could represent it well due to the lyrics, musical structure, and emotions. I suggest to listen to the song if you haven’t.