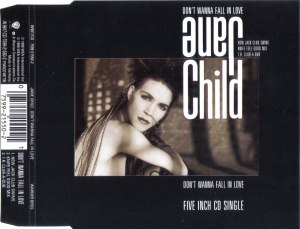 Happy Canada Day to all my readers!
Over the past twenty or so years. many Canadian artists have been featured and became immensely popular all over the world. Barenaked Ladies, musical goddess Celine Dion, rock-pop princess Avril Lavigne, “boy wonder” Justin Bieber (which you should check out his new single with Skiillex), and others. But, none were more eccentric or skillful at playing the keyboards than today’s featured artist.
Jane Child was born and raised in “The Big Smoke”, Toronto. She came from a musical family as her mother was opera singer Lorraine Johnson and her father was violinist Ricky Hyslop. Growing up, she sang in various chours including the children’s choir at the Canadian Opera Company. By her teenage years, Jane started to create her own bizarre fashion styles as she had braided hair with a mohawk, nose chains, and the Sinead O’Connor-type of clothing.
Sometime near the late 80s, Jane was offered a recording contract with the label Warner Bros to write and produce her own music. She released her self-titled debut album in the fall of 1989  It produced a couple of singles, including the hit “Don’t Wanna Fall in Love”. That single was featured on many top 40 charts in various countries, including #2 on the US Billboard 100. Jane released a follow-up album, named “Here Not There”, four years later, which was not as successful as her first one. By the late 90s and early 2000s, Jane Child faded from the spotlight as she worked in many indies outlets with her husband Cat Gray.
“Don’t Wanna Fall in Love” is a pure synthesized keyboard pop song with some R&B thrown into it. You can hear the R&B influences within the first fifteen seconds of the song with the mid-range, twangy melody to introduce the song. After that, the song keeps going with Jane’s meticulous use of the keyboard. She really knows how to master a keyboard with the techniques she displays during this song. One of my favorite parts of the song happens to be the modulated chords before the first verse. As you could see in the video, Jane plays with such raw emotions that you can even feel it while listening to “Don’t Wanna Fall in Love”, especially when she rams the modulation switch back and forth while pounding away on her keyboard. Other great parts are at the musical interlude (she has some amaaaaazing keyboard skills here because I haven’t heard or seen a person play like that ever, or maybe I have…) and at the big musical exposition with Jane moving up the scale before the last chorus.
The other prominent aspect of this song is Jane Child’s vocals. Her vocal style reminds me a lot of Avril Lavigine’s as both are, as you could. classified as “rock meets pop” vocals. Although Jane’s are more nasally and trying to emulate a R&B style in this song, both ladies put that “oomph” that you can only hear in a rock or R&B song. You can hear this particular vocal style during the second verse when she sings “And you have started sinking in, Whoa baby you’re way out of line now”. When she sings like this, it intensifies the song’s emotion. Sadly, I feel like she has lost that fiery vocal style recently. If you take a look at the performance on “The Wayne Brady Show” below, she can barely sing  “Don’t Wanna Fall in Love” with ok vocals.
Besides that, you should listen to “Don’t Wanna Fall in Love” as it displays Jane’s amazing keyboard skills and fiery vocals. The song is one of my most recent favorites because it’s an amazing song that you can’t really attach a label to it. Sure, it’s a mixture of rock (as it’s edgy), synthesized dance music (hey, keyboards), and R&B (see “wooo” and “oh baby” vocal parts), you can’t exactly say it solely belongs in one genre. It belongs in many.
Please give it a listen and tell me what you think!