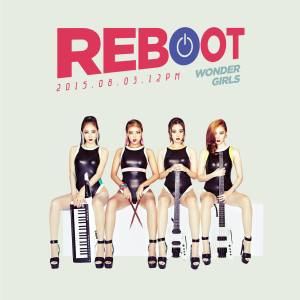 “JYP and the Wonder Girls, we’re back”
— “I Feel For You”
The Wonder Girls are back! Did you miss them? Or have you forgotten about them?
I can admit that I have forgotten them a little bit because “REBOOT” is their first album in three years. I can’t completely blame them for the long time between releases. One reason is because how funky Korean record labels release albums, especially for idols. I still can’t wrap my head around the concept of a “comeback”. How can SHINee have a “comeback” this year when they released an album last year? They didn’t take a hiatus like the Wonder Girls did.
Also, the lineup was shaken up with the group losing two members and gaining one. First, it was Sohee and leaving in order to focus more on an acting career. Then it was Sunye after she got married and gave birth a daughter. However, Sunmi, from the original lineup, came back  The now-four member group had a dilemma; when can we release our new album?
The answer came last week when “REBOOT” was released all over South Korea. An ode to ’80s synthpop, the album features the girls as a band with each member playing an instrument. It was later revealed in an interview that the instruments were just for the visual concept for the album, the girls really couldn’t play them.[1]  However, the girls did contribute to album by writing lyrics and others things, according to the CD booklet.[2]
I think that “REBOOT” is an enjoyable album once you get over the initial shock of the “old skool” throwback. Despite “I Feel You” being the lead-in single, I am not really fond of it. I like the first track, “Baby Don’t Play”, instead. What hooks me to the song is the deep bass guitar featured during the verses and the synthesizers. The sharp keyboard riffs during the interludes reminds me of Jane Child’s techniques in “Don’t Wanna Fall in Love“. Also, the loop-y loop, upward progressive of a complete scale in the beginning, just before the first verse, reminds me of something from a Janet Jackson or a R&B song in the 80s.
https://www.youtube.com/watch?v=pbvqPnUW_1I
Runners up would be “Back” and “OPPA”. “Back” sounds like a 90s’ American R&B/hip-hop girl group-type of song, like the stuff found on TLC’s first album. The song is so hardcore with Yubin and Lim show off their amazing rapping talents. Meanwhile, “OPPA” sounds like a variation of a song from the “Love Shack” era of The B-52’s. But, each song on this album is astounding and it’s hard to say if there is even an awful song.
“REBOOT” makes me excited for The Wonder Girls’ comeback! The album is well-crafted and features a diverse range of songs that features the diverse talents of each member. Even though I was shocked at first, I really like the throwbacks to the 80s and 90s in each song. Now, it’s time to break out my 2009 “I Wanna Nobody But You” Wonder Girls t-shirt and dance to the album.
You can listen to the album too! You can listen at this link on Youtube.